Chat with us, powered by LiveChat
HomeAll posts2013 KCA Ambassador 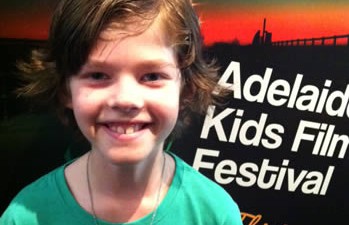 It’s hard to believe that it has been a year since my name was called out as the 2013 Ambassador for Kids Camera Action.
I still remember being shocked and excited when I was chosen, but also nervous, as it meant I’d have to give this speech! But here I am.
I have made 10 films since joining Kids Camera Action in early 2012, ranging from animation to documentary to music video.
My passion is acting, but as an actor, I think it’s very important to learn the process of film making, from the script development, to the camera operation and sound, to the editing of the finished piece.
My main job this year as Ambassador was to promote Kids Camera Action to the world.
I kicked off by holding a mini film festival in my class at the end of last year. I screened all the films I made and the class voted on their favourite.
I photocopied flyers and handed them out to my friends, my Mum went mad on Facebook, and I wore my T-shirt to many public events.
But the most powerful form of promotion is still, word of mouth. Many of my friends have joined me at the film workshops, purely through my recommendation. These friends include a girl visiting from America, and a Canadian boy who now lives in Vietnam.
As I step down as 2013 Ambassador, I would just like to say a HUGE thank you to Chloe Gardner for giving me this amazing opportunity, and on behalf of all of the Kids Camera Action students, THANK YOU for dedicating your time to kids’ filmmaking.